Radical Transparency: Inviting Your SaaS Audience Behind the Curtain 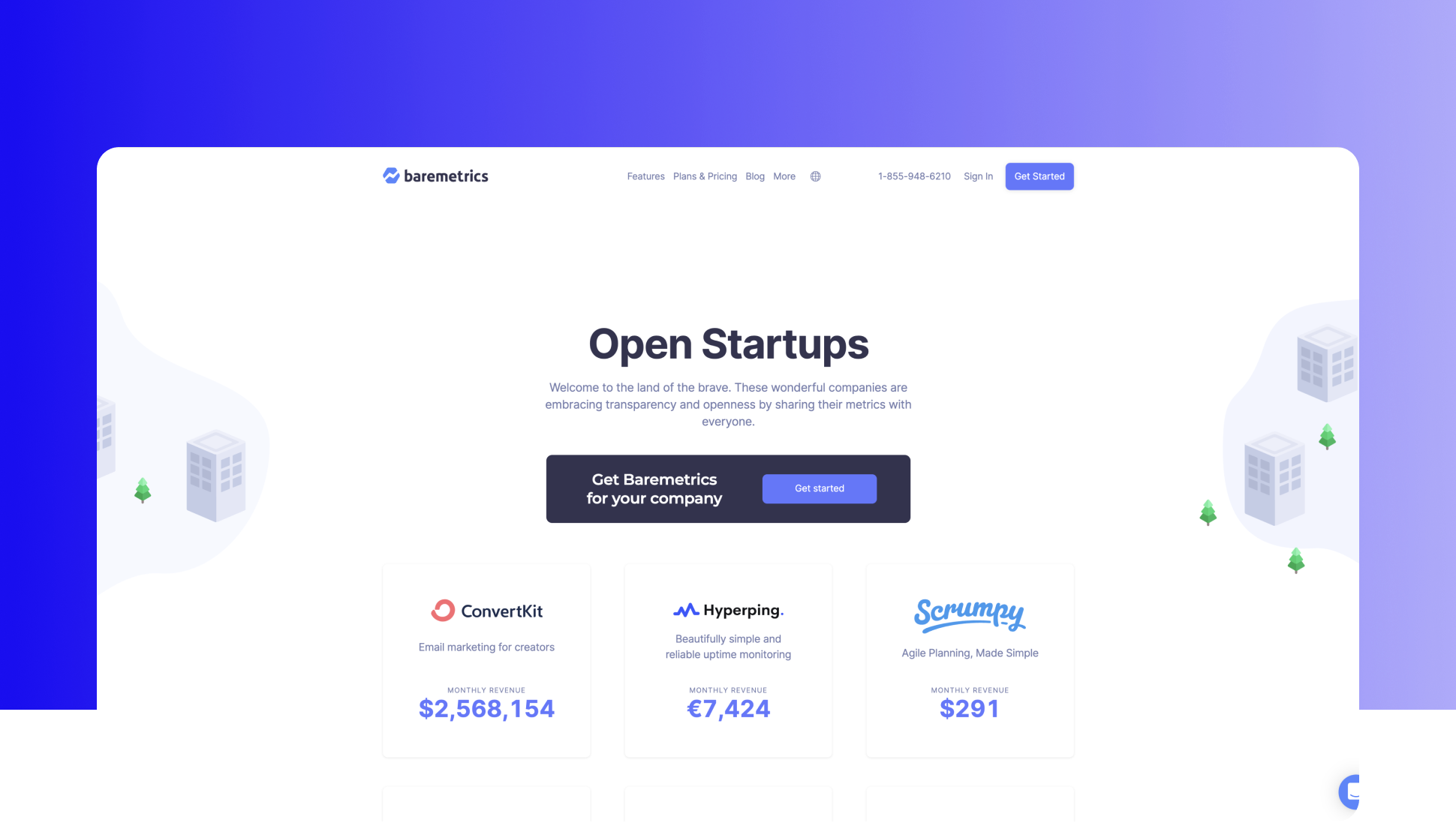 Build trust* with your audience, prospects, users, customers, community members, and other company stakeholders by embracing the Radical Transparency movement and getting open about the company’s internal processes, revenue, and numbers.

*According to a Forrester report on buyer’s behavior, “Trust will become the new currency.”

In 2014, Baremetrics*, a subscription analysis platform, made its revenue public.

In 2015, Baremetrics launched the Open Startup Initiative, providing a dashboard that allows companies to share revenue metrics such as:

According to Josh Pigford, founder and ex-CEO at Baremetrics:

“Historically, businesses and startups are really tightlipped. Everything is a trade secret.”

But over the years, a handful of companies discovered that being fully transparent can be beneficial.

“Being open with your company adds humanity to what’s generally thought of as faceless. It keeps your company accountable instead of hiding under the hype that’s so typical in the startup world.”

*Although Baremetrics was sold in 2020, the new executives decided to keep public essential business stats.

We can’t associate Radical Transparency with Baremetrics, though, as the movement exists on its own, inspiring SaaS companies to get open about internal processes, reports, revenue, and more.

📓 Open Metrics: Publicly shared metrics and business stats. Usually, companies keep these metrics up to date. Some companies use the Baremetrics, ChartMogul, or ProfitWell dashboard to automatically publish and update their business metrics.

📓 Radical Transparency: Being open about various business aspects, such as the company metrics, code source, roadmap, internal operations, and more. Several companies, such as Buffer and Gumroad, are transparent about (almost) every single aspect of their business.

📓 Stealth Startups: Stealth startups avoid public attention. Some founders build stealth startups to hide information from competitors or — as part of a marketing strategy — to manage their public image.

By embracing Radical Transparency and by sharing your internal process with a wide audience, you’ll access growth opportunities, such as:

From its launch, Buffer was an outlier in terms of transparency. It all started in 2011 when co-founder and CEO Joel Gascoigne publicly shared a user-related milestone.

The company became open about its stats and practices long before the Radical Transparency Movement gained popularity.

In 2012, the company leadership publicly shared the slide deck they used to raise half a million dollars.

Later in 2013, Buffer published its deck on the company values. The presentation included a note called “Default on Transparency,” highlighting actions such as:

The same year, Buffer co-founder and CEO Joel Gascoigne sent two emails to his team, disclosing first internally (and then externally) the salary formula and later the equity formula.

In 2014, after Baremetics announced its Open Startup Initiative, Buffer made public its revenue dashboard with real-time revenue numbers.

In 2015, as the Buffer transparency article notes:

“We shared our first diversity dashboard in June, along with our full diversity stats. We know we did (and still do) have work to do when it came to diversity, and we wanted to share the details that can help us grow as an inclusive and diverse team.”

Also, in 2015, the Buffer team published an article on Transparency Movement.

“Buffer started around late-2013 with their Open blog, and as you can see from the graph, that’s when you notice a change in their revenue trajectory. Transparency made Buffer a unicorn in the startup world and brought them a lot of attention, especially from the media.”

Later, the Buffer leadership added a product roadmap, a public Trello board, End of Year reports, Equal Pay reports, and a formula for profit sharing and charitable contributions.

Today, Buffer is sharing things such as:

“As April comes to a close, and we look ahead to another month where our global team is living in various forms of lockdown and isolation, I decided that for the month of May, Buffer will operate under a 4-day workweek (at full pay) across the whole 89-person team.”

In his article, Joel explained why the company leadership decided to try a 4-day workweek, publishing the results of All Hands surveys, such as:

Joel also described what a 4-day workweek schedule looks like for each department.

What’s impressive is how comfortable Joel felt with the lack of certainty about whether the managerial experiment will work or not.

In other words, Buffer’s transparency came hand in hand with a high level of vulnerability, as the 4-day workweek could have ended as a big failure.

“Depending on the results and outcomes, we could possibly see a 4-day workweek continue for another month or longer, or we could return to a more typical workweek.”

If you’re wondering, the 4-day workweek experiment worked out just fine. The results were quite impressive.

And that’s not all. If you want to learn more about transparency at Buffer, check out these articles:

Jon Yongfook, the Bannerbear founder and CEO, is sharing the following metrics:

Apart from that, Bannerbear also provides data on the last six months’ performance, including signups, new customers, and conversion rate.

According to Peer Richelsen, co-founder and co-CEO at Cal:

“From the very first days of the project, we’ve actively built out our /open page. I believe it was the third page we’ve built internally but haven’t publicly announced its existence before today.”

The Cal founders are sharing data such as:

The Friendly founders are sharing a wide variety of data, such as:

The Friendly team is sharing website metrics, such as:

The dashboard is also showing visits in real-time.

As founder Stefan Vetter highlights, Friendly is the first and only Open Startup in Switzerland.

The Mailbrew and Typefully founders feel comfortable sharing metrics on:

The graph shows the growth evolution for 1, 3, and 6 months.

The Leave Me Alone founders created several metric categories. Let’s take them one by one:

The stats show data such as:

The Growsurf team is sharing the company goals publicly:

Also, the company shares via ProfitWell dashboard the following data:

Growsurf is also open about the website traffic, sharing stats such as:

>> ConvertKit, a marketing platform for creators

As Nathan Barry, founder and CEO at ConvertKit, notes:

The Ghost team is sharing data such as:

According to the Simple Analytics team, “Simple Analytics is an Open Startup™, which means it operates fully transparent and shares its metrics, including revenue, costs, users and traffic.”

The company is sharing data, such as:

The company is also making use of its platform to present the website traffic stats, which include:

Wild Audience is publishing quarterly transparency reports, which include detailed data and videos on topics such as:

Sahil Lavingia, the founder and CEO at Gumroad, usually publishes the company’s quarterly board meetings on YouTube.

During these meetings, the team usually discusses the metrics, the new features, and the next steps.

Also, Gumroad has an open Wiki, listing all the internal processes, from the roadmap to how the team decides what to work on next.

► Quick note: Patrick Campbell, founder and CEO at ProfitWell, published an interesting post on Twitter, asking if anyone knows a company doing $20M+ in ARR and building in public or being transparent with their financials. The conversation revealed that no other $20M+ ARR company, apart from ConverKit and Buffer, is open about its internal processes.

There’s no “right” way to build an Open Startup. You’ll discover a plurality of transparency practices and examples. The variety of approaches focuses on what to share, how to share, and when to share. Let’s take them one by one:

‍Some founders feel comfortable with publishing the company’s $MRR. Others may be OK with sharing the product roadmap only. There’s a wide variety of elements one can share publicly:

Some may share a few business stats along with the roadmap. Others may share their personal lessons only.

‍Considering the multitude of channels, founders have to choose where they want to share their open metrics and personal notes:

‍Founders start sharing business data at different levels of company growth. For example, some may choose to launch an Open Startup from the beginning. Others may open up after the company reaches an important milestone.

Also, some founders may struggle with deciding the sharing frequency. Again, there are no rules. It can happen:

Each founder will decide what, how, and when to share depending on what feels comfortable and makes the most sense, strategically speaking. It’s also worth mentioning that some founders may initially share everything openly, only to discover that they aren’t fully aligned with this approach. As a result, they’ll stop being part of the transparency movement, going back to less open communication.

💥 To remember: There are no “rules” or “standards” on embracing Radical Transparency or building an Open Startup. However, before joining the Transparency Movement, founders must decide what to share (company metrics, personal stories), how to share (raw data, videos, articles, reports), and when to share (daily, weekly, monthly, quarterly, and/or annually). Even if you didn’t embrace the Transparency Movement, you have to build internal transparency, building trust inside your company. Finally, if you don’t feel comfortable, you’re free to stop sharing your company’s metrics or personal stories. Embracing Radical Transparency isn’t a prerequisite for success.

Thank you! Your submission has been received!
Oops! Something went wrong while submitting the form.
Articles ✍️Growth Ideas Library 💡Podcast 🎧Newsletter 📨