Create an In-house Media Brand to Grow Your SaaS Company 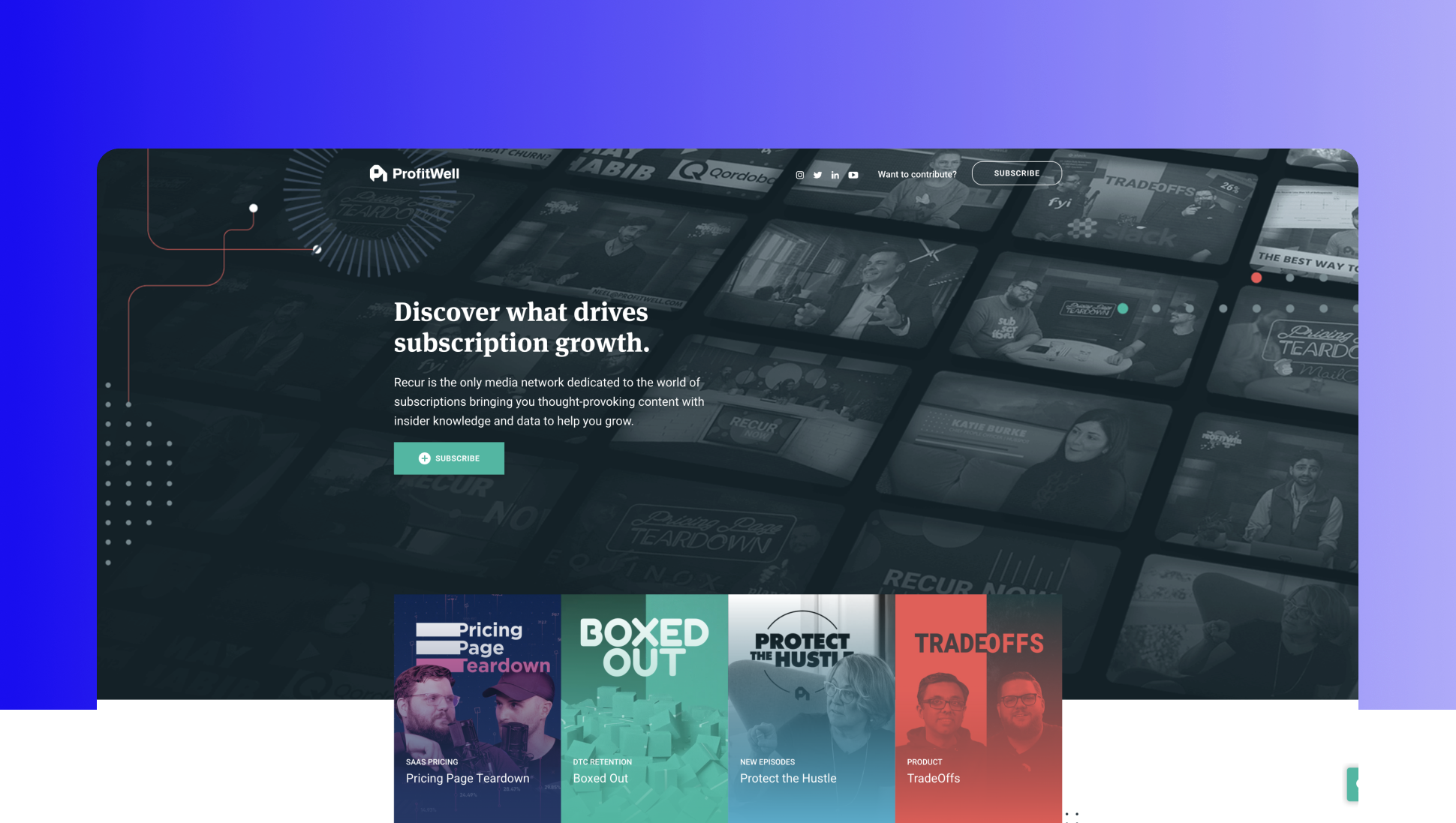 Move away from earned media and build an in-house media brand. Create bingeable media products, such as TV shows, docu-series, and movies, to grow your audience.

According to Patrick Campbell, founder and CEO at ProfitWell, there are no better experts at acquiring audiences than media companies.

So instead of trying to make inbound marketing work, copy networks and treat content like shows to:

“Media is better than traditional inbound marketing because inbound is losing its effectiveness. Everyone is running the same playbook. They’re writing better, deeper content. Higher quality isn’t bad, but given the deluge of content out there, the approach is heading to just another plank in the platform of online advertising. Put another way—the inbound marketing of today is the equivalent of running google search ads.”

📓 Media: According to The American Marketing Association (AMA):

“Most sales enablement firms and marketing groups use content and media as synonyms.” However, “Media is not content any more than the envelope is the letter.” As AMA notes, “Content is the message. Media is the vehicle of the message.”

📓 Media brand: A broadcaster that creates and distributes informational products to inform, educate and entertain its audience.

📓 In-house media brand: A (SaaS) business or organization that has built a media studio and works on launching different media products.

According to Mario, the founder of The Generalist, highlights: “Harvard Business School is a bigger media company than Forbes.”

Founded in 1922, Harvard Business Review (HBR) transformed Harvard into “one of the world’s most impactful media organizations.”

“Marc Andreessen, the firm’s co-founder, has privately expressed antipathy toward the press, which he and some other Silicon Valley leaders consider to be overly critical of technology firms and their perceived impact on society. Andreessen Horowitz is moving in the direction of “owned media, not earned media,” said a person close to the firm, meaning that it wants to produce content rather than work with existing press outlets.”

How does this work?

According to Patrick Campbell, a media strategy gains leverage in time. As Campbell notes:

“Instead of putting an offer at the center of the strategy, media centers on building an audience. Your goal isn’t to chase the spikes and long tails of an offer attracting leads; it’s to move your audience count up and to the right. It’s exceptionally effective, as well.”

“The key difference here is media centers around shows. You attract an audience on a given topic or outcome and then episodically entertain and educate that audience towards that topic or outcome. For instance, we can create a show that teaches people how to set up their subscription pricing strategy over a season of 13 episodes (a quarter). We can also create a show that does a case study each week on the pricing strategy of a company.”

In other words, having an in-house media brand allows you to create new media products, episodes, and seasons consistently. Subsequently, this action leads to gaining subscribers, aka leads in time who’re interested in consuming both old and new shows, episodes, or seasons.

Build an in-house media brand to support your marketing strategy and generate multiple growth opportunities, such as:

► Quick note: Creating an in-house media brand won’t increase your business revenue immediately. However, it will create a unique environment to attract and build an audience through a consistent engagement experience with your brand, based on consuming bingeable content that is both educational and entertaining.

>> Mailchimp, an automation and email platform

Sold in 2021 to Intuit for $12 billion in cash and stock, Mailchimp is one of the biggest bootstrap SaaS companies. Yet, few know the impressive in-house entertainment studio Mailchimp built a few years ago.

According to Sarita Alami:

“Mailchimp Presents was born out of a desire to enrich the way we were doing brand marketing for one and then also enrich how we could express being a brand in the world, and what it meant to participate in our customers’ lives for sure, but also in the corporate landscape, and our corporate social responsibility, from a cultural sense as well.”

“And I think that figure out essentially how we can use the content as a conduit for an emotional relationship with our audience in a way that feels both helpful and right for our brand. And Mailchimp is a brand that’s firmly rooted in empowering underdog entrepreneurs and people who are growing. And we built a whole studio around it.”

The Director of Programming at Mailchimp Studios also highlighted:

“And we formally launched Mailchimp Presents a little under two years ago. And that’s part podcast network, part cultural engine. And then we have over 100 short films, and about a dozen video series, and various—we call them activations because it’s just different ways for us to experiment with how to build that relationship and how to be in people’s lives in a way that feels useful and authentic for us.”

Mailchimp became the Netflix of Business. The media collection Mailchimp created is impressive. Here are a few examples:

According to Sarita Alami, Mailchimp is leaning heavily into short-form content, with 5-8 minutes each episode. Also, in one of her interviews, Alami noted that Mailchimp’s guiding principle has been to create immersive content that is captivating enough to stand on its own.

>> ProfitWell, a financial and subscription platform

In 2019, ProfitWell launched Recur Network, a media brand for SaaS shows. According to the Network website, “Recur is the only media network dedicated to the world of subscriptions bringing you thought-provoking content with insider knowledge and data to help you grow.”

To this day, Recur Network launched shows, such as:

🗃 Pricing Page Teardown. A weekly show where ProfitWell breaks down strategies and insights on how subscription companies can win with monetization from all market corners.

🗃 Boxed Out. It shows the audience what happens when people buy from DTC’s subscription brands and then cancel their subscription.

🗃 Protect the Hustle. A show about and with people in the B2B SaaS growth trenches.

🗃 RevOps & Hops. This show uncovers the mysteries and truth that surround the RevOps space.

🗃 Show Business. A show on building brand affinity in the least boring way possible. People can learn from experts how to create a compelling video series or podcast for their brands during the show. The show has 20 episodes divided into four parts. Also, it provides a transcript, deleted scenes, and even a certification. You can take the test, and if you answer correctly, you’ll get certified in Brand Show Creation. The production is top-notch.

🗃 (Out Of) Office Hours with Chris Lavigne. Wistia’s Head of Production, Chris Lavigne, talks with guests from all industries about video production in a remote world during this show.

🗃 Low Views, High Impact. The Wistia hosts sit with guests in this micro-series to uncover how videos that may not have racked up tons of views can still significantly impact business.

🗃 One, Ten, One Hundred. The creators of this Webby Award-winning documentary challenge a video production agency to make three ads with three different budgets.

🗃 Talking Too Loud with Chris Savage. In this podcast, Chris Savage, Wistia’s CEO, takes listeners inside the mind of entrepreneurs as they the most challenging aspects of building more human brands.

In December 2021, Webflow launched Webflow TV, a space for original and highly curated stories of creativity, entrepreneurship, and designing outside the lines.

Webflow TV is offering media products, such as:

🗃 Stories. Experience the power of visual web development through these real-life stories of creativity, flexibility, and success.

🗃 Generation No-Code. No-code is closing the gap between idea and impact. Gain inspiration from four real stories of pursuit, empowerment, and the magic of creativity.

🗃 Inside Marketing Design. A podcast created to help you improve your skills and have more impact as a marketing design professional.

🗃 Portfolio Design. As a creative, your most powerful tool is your portfolio. Learn how to use that power wisely and responsibly.

🗃 Built by Hand. To rebuild his neglected website, a self-taught designer and entrepreneur must discover his voice and carve out a place among the businesses he’s helped build.

🗃 Your Career Design. So you want to be a product designer? Get empowered by hearing what it (really) takes to succeed in the product design industry.

🗃 Creator Sessions (by ConverKit). An online event series showcasing the art and stories behind today’s most beloved musicians, artists, videographers, and photographers.

🗃 Young Guns. A series that follows up and coming designers across the globe in their pursuit to become creative professionals.

🗃 Trust the Process. What does the website design process look like for a freelancer, and what are the common problems to solve?

🗃 Design from Scratch. What’s it like to work as a designer at a startup in Los Angeles? How do you begin the task of creating a huge facet of the business: the website? How do you get everyone involved and on the same page?

Resources are the main requirement for building an in-house media brand. You need to invest in elements such as:

Plus, you’ll have to grow a production team, including roles such as hosts, producers, videographers, screenplay writers, editors, and more. It’s worth noting, though, that according to Patrick Campbell, one videographer was enough to kick off the show production.

At the same time, according to Dan Mills, Head of Wistia Studios:

“Making a show can be a lot for one person to manage, so the next key hire for your team is a producer. A producer can manage all the logistics around show creation. A great producer is going to help keep your content creator on track and will probably also have the bandwidth to be thinking about the next project that’s coming down the pike.”

► Quick note: If you don’t have resources, you can always start small by launching a micro media product, such as podcasting in seasons or a YouTube series. Then, you can build your media brand gradually.

Thank you! Your submission has been received!
Oops! Something went wrong while submitting the form.
Articles ✍️Growth Ideas Library 💡Podcast 🎧Newsletter 📨